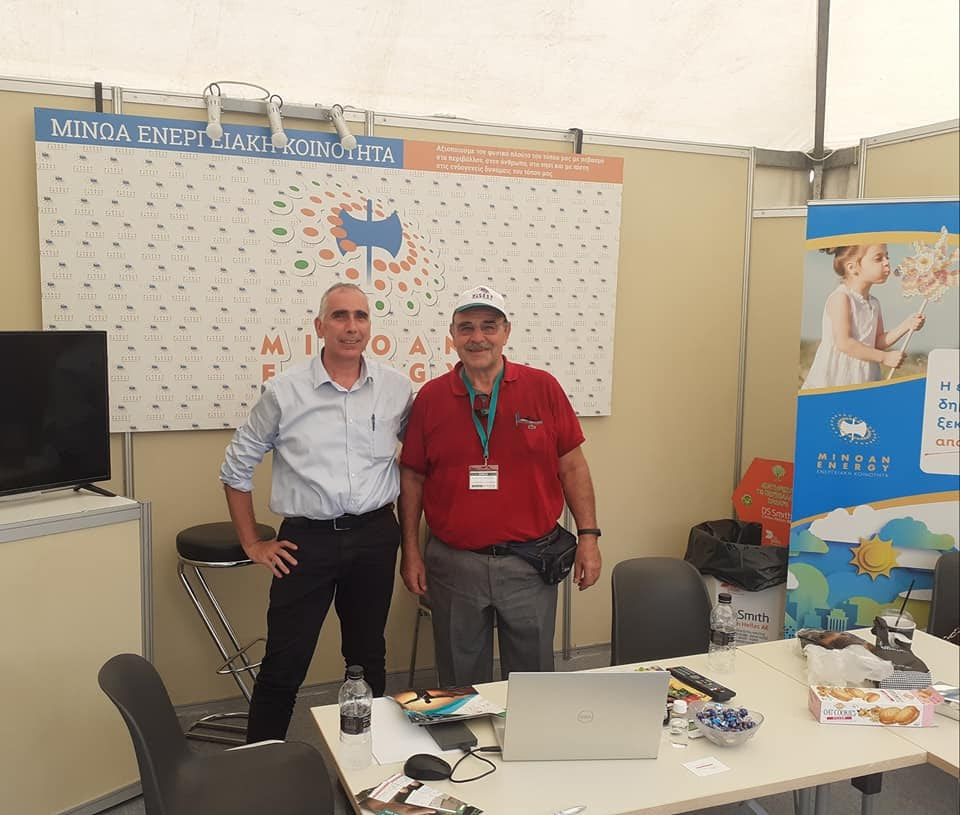 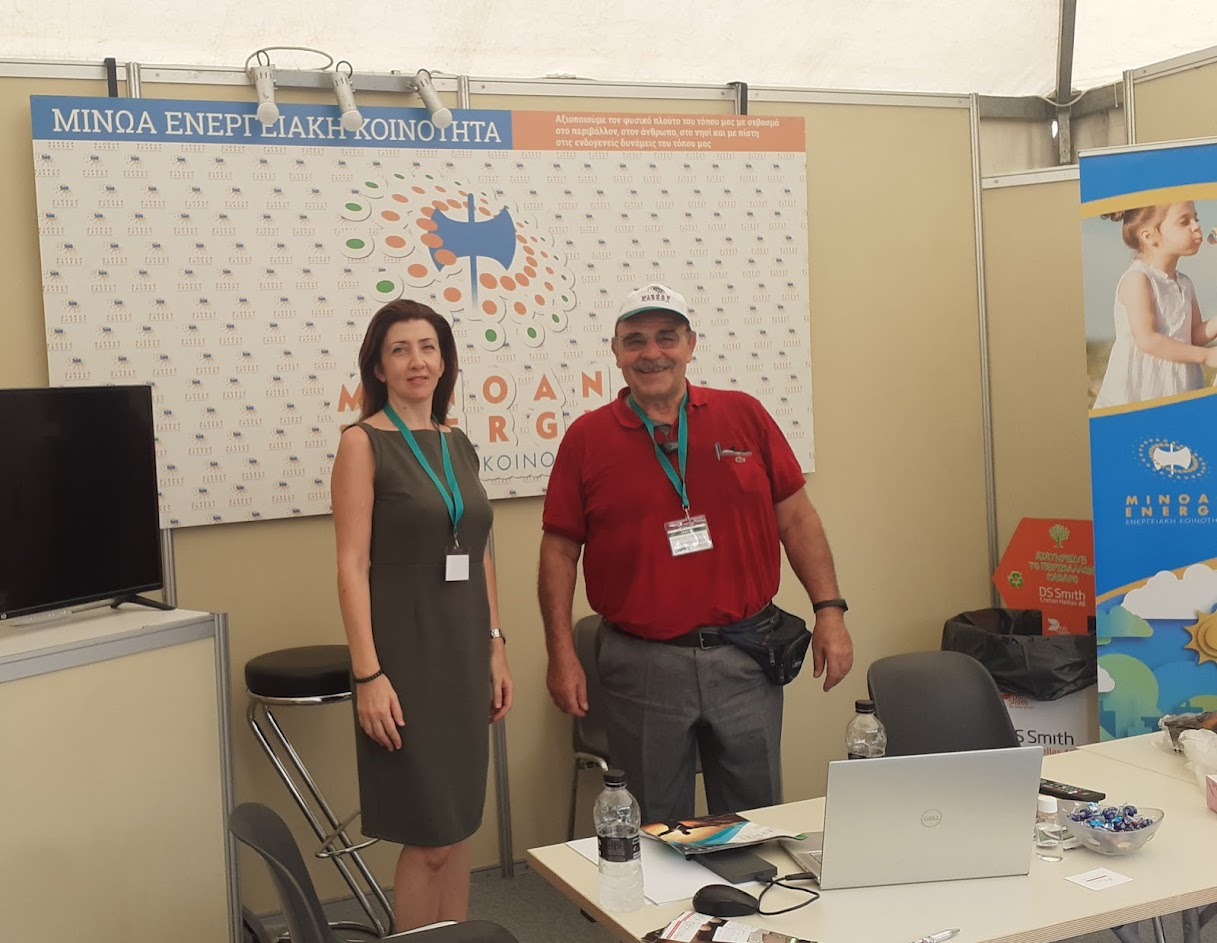 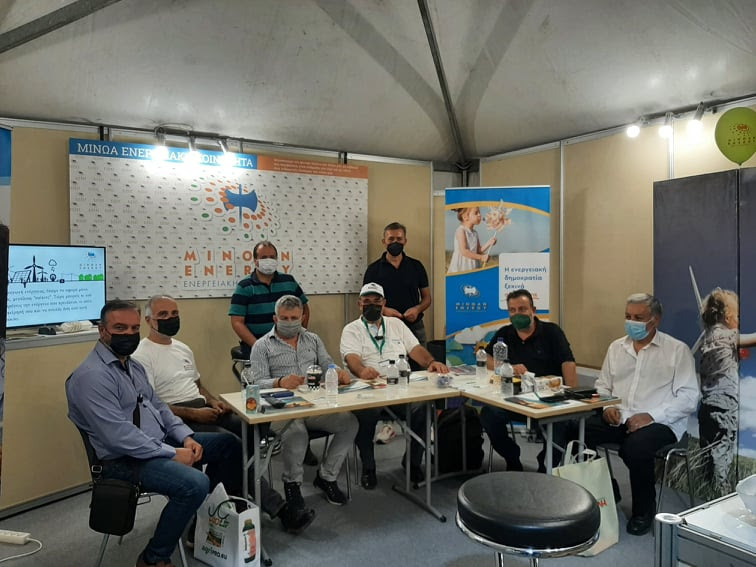 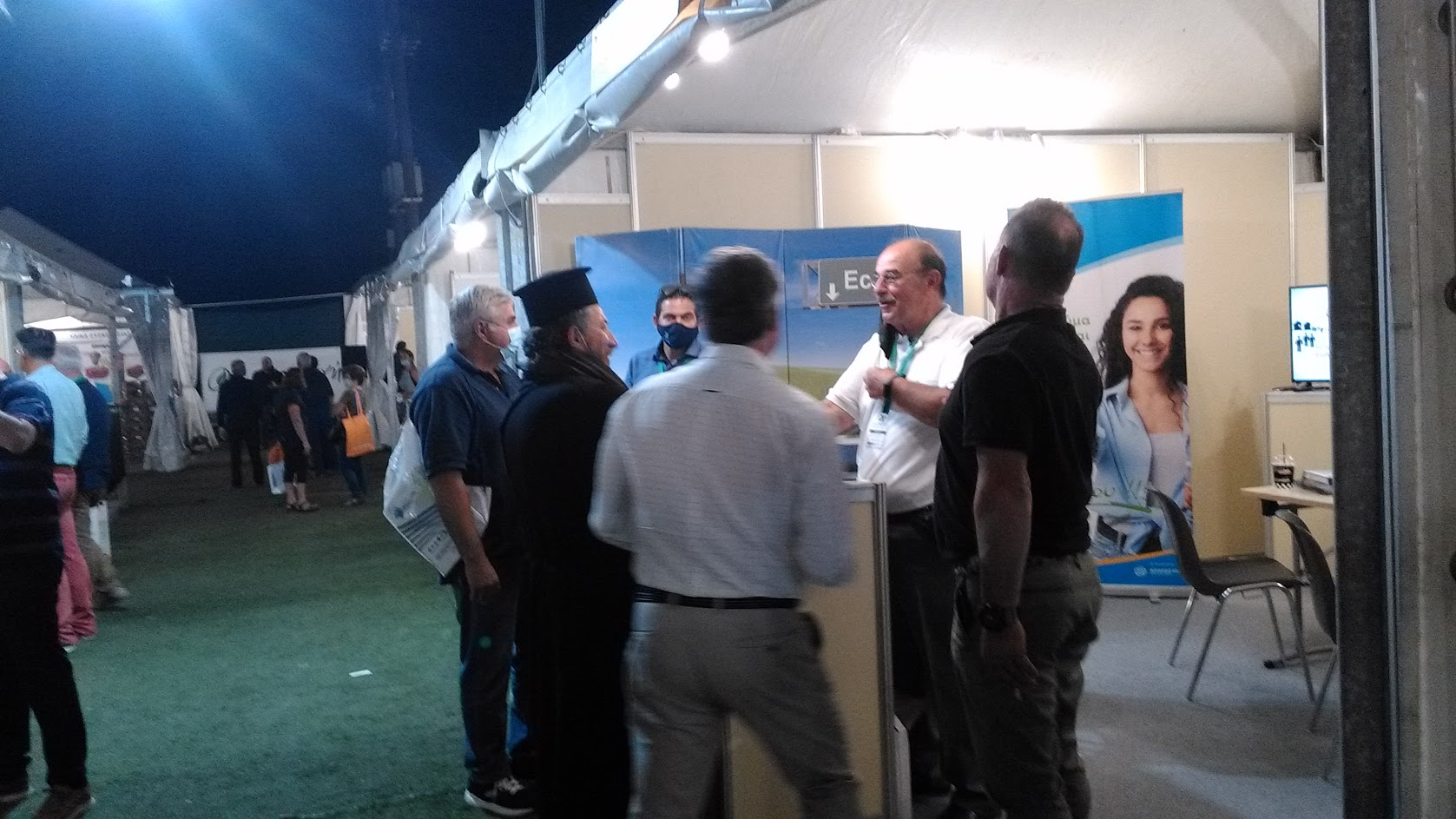 One more successful presence of the Minoan Energy, this time at the Agricultural Exhibition of Ierapetra. 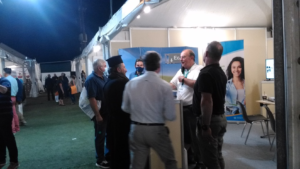 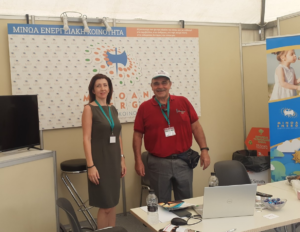 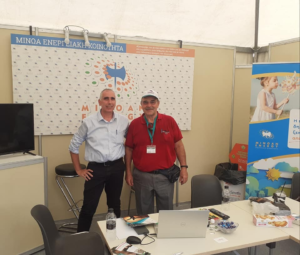 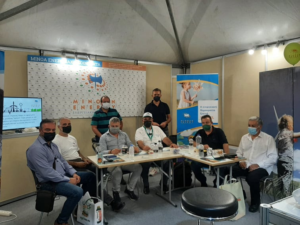 One more successful presence of the Minoan Energy, this time at the Agricultural Exhibition of Ierapetra, held from 17 to 19 September 2021.

The staff members of the Community really enjoyed the interaction and exchange of views with this particularly informed and professionally active crowd of Eastern Crete. Many of those who visited our exhibition stand welcomed the commencement of the Community’s activities with enthusiasm, others with relief contemplating the bleak energy future that is prescribed in Europe in the after Covid era, while others as a self-evident progress for an island, such as Crete, which is so energy endowed.

Of course, the chairman and the Board Members of the Minoan Energy had also the opportunity to converse with representatives of political parties and municipal leaders. In particular, the members of the parliament Mr Kegkeroglou, Mr Syntychakis and Mr Logiades who were informed of the long-term planning of our Community. There was also a discussion on ways of further strengthening the institution of Energy Communities of people’s broad-based strategy, such as ours, with the view to dispose the energy surplus of our region to all its inhabitants.

Equally constructive was also the meeting with the host and mayor of Ierapetra Mr Kalantzakis, with whom a tighter collaboration with our Community was agreed, through working groups composed of staff with powerful scientific and technical knowledge. Respectively, in the presence of the Mayor of Phaistos Mr Nikolaides and the chairman of Minoan Energy, a work meeting was arranged in the coming period. A common component of both of these meetings was to find solutions for the increasing energy demands of the municipalities. 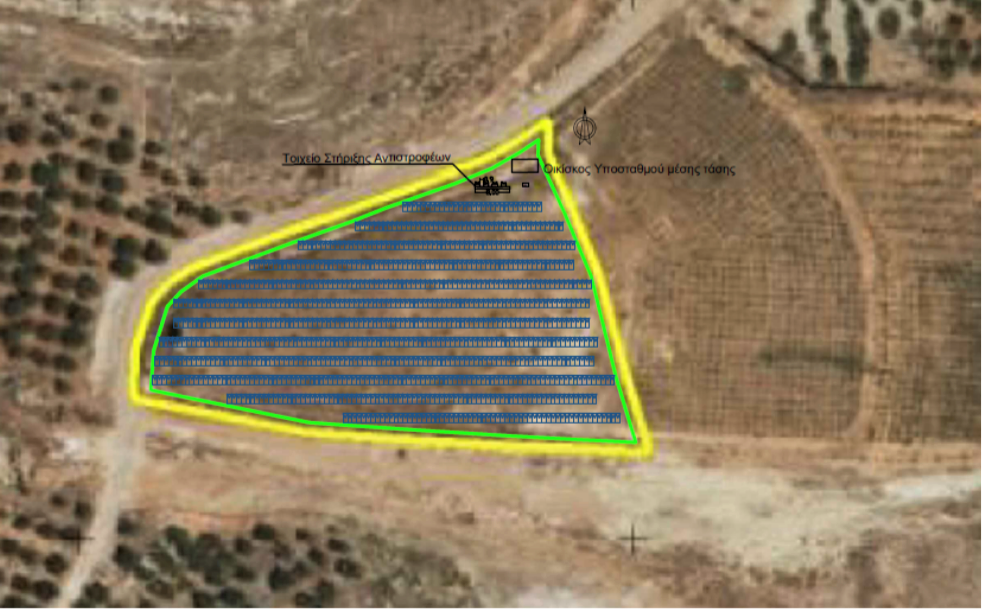 Commissioning the implementation of the first project of virtual net metering in Crete, 405KW capacity

In the coming week, we are commissioning the implementation of the first virtual net metering in Crete with the capacity of 405KW.

A few days ago, and after all licences were granted to us, the Chairman of MINOAN ENERGY informed the members of the commencement of the procedure for the implementation of our first energy project.

It is time that all members deposit the corresponding instalment B for the above project until the 10th of October 2021.

We express our joy and satisfaction, since the participants in the project will no longer face increases of the electricity bills, which all show to be very high.

Also, if you have not sent us an electricity bill and you wish to participate in the first project, there is still time to submit it. 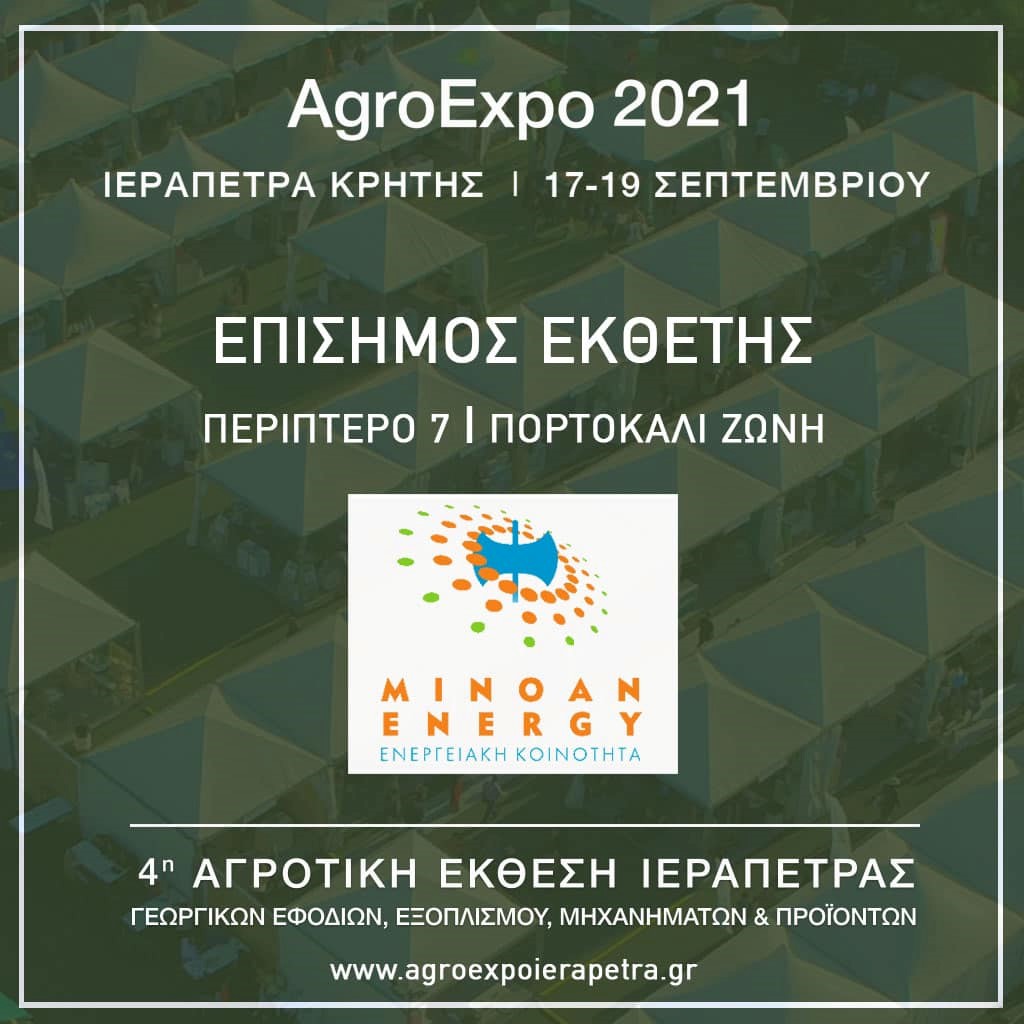 Minoan Energy presence at the Agriculture Exhibition of Ierapetra

In the sunny Ierapetra, the executives of "Minoan Energy" will be present for the three days from 17 to 19 September, representing our Community in the Agricultural Exhibition organized for the 4th year by the Lassithi Chamber.

The importance of the Exhibition is reflected in the goal set by the organizers themselves, to become the most important regional agricultural exhibition in the geographical area of SE Europe.

It will therefore be a first class opportunity for our friends from Eastern Crete to get to know the people of "Minoan Energy" up close and to discuss the membership benefits. In addition, they will be informed about the implementation of our first projects but also about the favorable conditions that we managed to incorporate in the legislative framework, after our recent meeting with the competent Minister Mr. Skrekas, for Energy Communities. 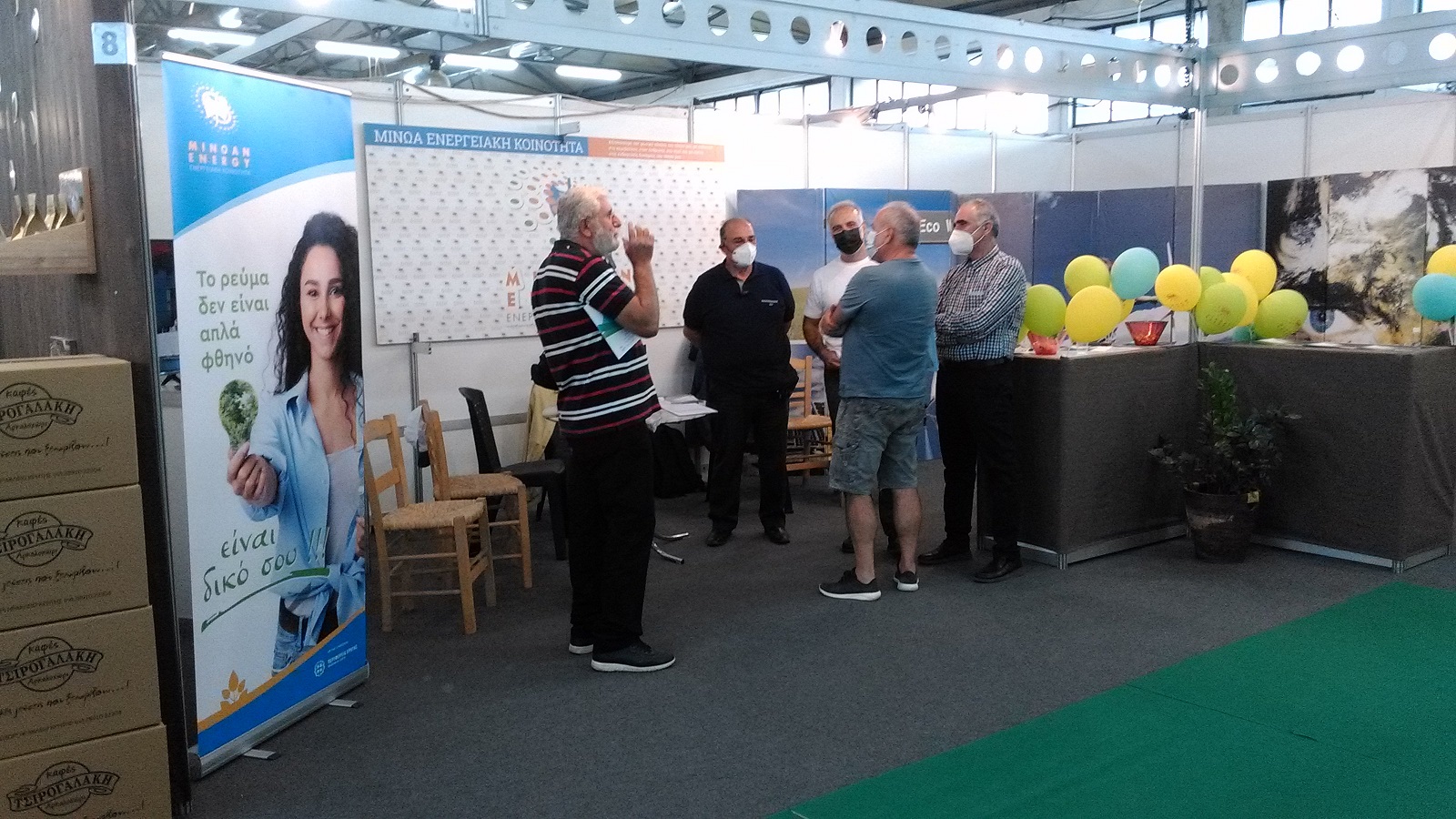 Minoan Energy presence at the Agricultural and Pastoral Exhibition of Arkalochori was successfully carried out.

Minoan Energy presence at the Agricultural and Pastoral Exhibition of Arkalochori, which was held from 1 to 5 September 2021, was successfully carried out.

They were also informed of the planning of the RES projects of Minoan Energy, the advantages our members get over individual initiatives and the Community dynamics deriving from participating in the Community, except from the households and businesses, agricultural cooperatives, municipalities and of course the Region of Crete.

There were more than a few occasions that the visitors of the Exhibition asked and received advice on energy upgrade of their businesses or the exploitation of their plots of lands, even in cases it did not fall within the activities of our Community. This is indicative of people’s trust, as well as the philosophy of Minoan Energy, which puts forward the well-being of the local society over speculation.

On Monday 30.08.2021, the Chairman of Minoan Energy, Mr Giannopoulos, had a very constructive and friendly meeting with the Minister of Energy, Mr Kostas Skrekas, in the presence of members of the Parliament from Heraklion Prefecture, Messrs Maximos Senetakis and Vasilis Kegkeroglou.

During the meeting with the minister, which was held at the Ministry of Environment and Energy, Mr Giannopoulos made various requests in relation to Energy Communities and especially those of broader base, such as ours, Minoan Energy.

The most important requests were for the Ministry to support our Community when it comes to frontier projects that the large team of technicians and scientists promote, to have security for projects of virtual net metering so that most households and businesses can participate and thus reduce the electricity cost dramatically, priority to granting of licence for projects etc.

The main request, perhaps the most important one, was the granting of space for electricity, that is licence for the creation of useful projects by the Community, as the production of energy by RES has a centripetal movement and for the first time in the history of the Country, revenue must have the same movement. In this way, the supplementary and satisfactory income for residents would be an important reason for people to keep living in their villages and avoid the rural areas becoming depopulated.

Mr Skrekas accepted many of the requests and especially the latter that is the most important, by saying that the Ministry will support the genuine Communities to their projects, that is those that offer to the local societies and whatever is relevant to us will be announced very shortly.

In addition, the minister accepted gladly Mr Giannopoulos’ invitation to visit Crete and attend an event that will be organised in the nearest future and would involve the exploitation of Renewable Energy Sources in our island and the benefit it would have for the whole Community.

Apart from Mr Skreka, Mr Giannopoulos thanks also the friends fellow countrymen members of the parliament, Messrs Kegkeroglou and Senetakis, for their active participation and their valuable interventions during the above fruitful and productive meeting.

Minoan Energy presence at the Pancretan Agriculture Exhibition of Arkalochori

Minoan Energy participates in the Pancretan Agricultural Exhibition of Arkalochori which takes place from the 1st to the 5th of September.

The visitors of the exhibition will have the opportunity to be informed about the prospects created by the energy transition from fossil fuels to renewable energy sources, and the role that our Community is called to play in the context of this transition.

They will also have the opportunity to be informed about the implementation of our first photovoltaic station, about the projects that will follow immediately after, but also about the benefits enjoyed by those who are registered members of our Community.

In the context of the project New Energy Solutions Optimised for Islands (NESOI) - which is EU funded by the Horizon 2020 programme and promotes sustainable energy projects –a workshop was held on Friday 20th of August at the registered office of the Technical Service of the Minoa Pediada Municipality between the staff members of the Municipality and those of Minoan Energy Community for the implementation of the project “Sustainable Actions for Viable Energy (SAVE)”, funded by the above-mentioned programme and in which both parties are involved together with the Region of Crete.

During the meeting, the participants from the side of the Municipality were the Secretary-General Mr Gabriel Kouris, the Head of the Technical Projects Department Mr Stelios Troulinos and the special advisors to the Mayor Messrs Georgios Katzagiannakis, Nikos Hronakis and Georgia Piligkotsi. The participants on behalf of Minoan Energy Community – the fellow coordinator of this programme – were the Chairman Mr Charalambos Giannopoulos and the founding member and advisor Mr Dimetris Katsamprakakis.

Both sides discussed in an excellent level of cooperation the details for the implementation of the part of the project concerning the drawing up of studies for the energy upgrade of the sport facilities of the Municipality and in particular the Municipal Swimming Pool and Indoor Gym in Arkalochori. The scientific-study team of Minoan Energy Community will take on the drawing up and conduct of the required studies for the upgrade of the above into infrastructures of zero energy consumption, while the Municipality will provide every necessary technical help and information for its implementation.

In respect of this new Municipal cooperation for the implementation of the project “Sustainable Actions for Viable Energy (SAVE)”, the Mayor Mr M. Fragkakis mentioned the following: “Our participation in the NESOI project of the European Union, as a partner organisation, together with a fellow coordinator of this project, Minoan Energy Community, which we thank for its cooperation, confirms our desire and vision for the protection of the environment, the openness of our Municipality and the development of fruitful cooperations for the implementation of ‘green’ politicians who will contribute to the transformation of our Municipality to an energy sustainable one”.